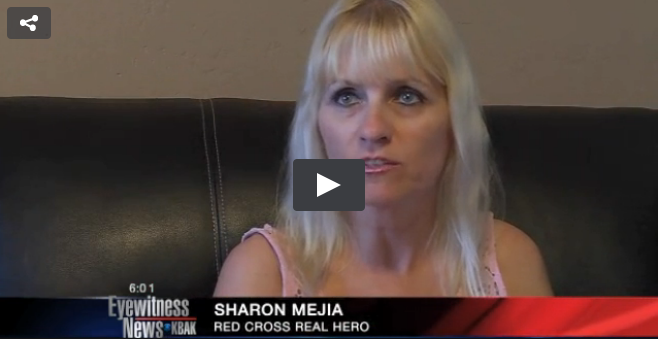 Owners of CPR Plus Honored as Hero’s

On Saturday, the Red Cross Real Hero’s organization recognized Tony and Sharon Mejia. This annual event will honor a real life local hero in the Kern County area who has helped to save a life or that has performed an act of compassion that was considered to be extraordinary or a larger than normal level of giving.

There is a time in all of our lives that we run across an emergency and when the proper training is capable of making a difference in someone else’s life” said Mr. Mejia.

The local Bakersfield couple had more than a standard layover in the LAX airport last year when they came across a man who had been lying face down when they decided to help when a lady asked if someone could make a call to 911.

Sharon who was a CPR and a licensed first aid instructor as well as Tony who was a paramedic stopped what they were doing to immediately help the man.

Mrs. Mejia first secured his airway and started the CPR as well as using the defibrillator to start his heart. It took about 20 minutes for the fire department to arrive and when they did, the man came to.

When the incident was over, the man, Ron called to thank the couple for saving his life.

The phone call was emotional said Tony Mejia. The couple and the man got together to have dinner and get to know one another.

The man, Ron and Tony ended up working at a previous job with another before the incident and did not know it and Ron lived only a short distance from the couple’s home in Bakersfield.

The local important individuals were also present with the Congressman Kevin McCarthy being present as well as the mayor of Bakersfield as well as the local San Joaquin Hospital were all present to present the award.

The man, who was saved, Ron, was also present at the event who also happened to be there on his birthday. Ron, who was there celebrating his first birthday since his cardiac arrest was happy to see Mr. Mejia.

The group of people also sang Happy Birthday to Ron while at the celebration. The appreciation they gave to Tony and Sharon Mejia was good but being able to see Ron was enough of recognition for the individuals they said. They were happy to be there to help and would have done it again if given the choice.

Honoring Real Heroes in Our Community