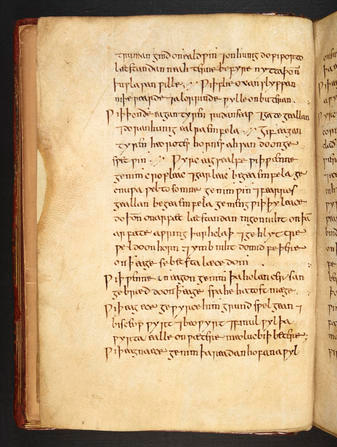 MRSA is no joke. It is a superbug that literally refuses to die but it is not the only super bug that has modern medicine stumped. All the known antibiotic treatments are just not working but the answer may be easy enough. Garlic, some stomach bile from a cow and a leek or two might be the key to killing off these super bugs.

According to a recent report out of the UK Christina Lee while  perusing an ancient medical journal from the 10th century (one of the first recorded medical books) found a recipe for an eye salve that was meant to be used to kill off eye infections.

It sounded like it should have some effect because all of the ingredients were known to have antibacterial properties but the results simply were astounding and far exceeded any expectations.

The recipe sounds more like a witches brew than a recipe for medicine but the steps to create the recipe make perfect sense now that we know that not only the ingredients but the type of metal that was used all could kill off bacteria. The recipe called for wine, garlic and stomach bile from a cow to be brewed together in a copper kettle and left to ferment for 9 days.

The copper kettle plays a key role because copper salt as well as the ingredients all have antibacterial properties.  When cooked together in the copper pot and left to ferment together absorbing the salts from the copper it stands to reason that the potion would become a potent antibacterial.

Christina Lee is an Anglo Saxon expert at the University of Nottingham and discovered the old recipe in Bald’s Leechbook and decided that it was worthy of experimentation and took it to the lab at the University. The recipe was followed to the letter and the results were simply amazing!

The concoction was used on MRSA bacteria in the lab both in a petri dish and on infected mice. It worked by killing 999 out of 1000 microbes.

“We were genuinely astonished at the results of our experiments in the lab. We believe modern research into disease can benefit from past responses and knowledge, which is largely contained in non-scientific writings,” said Lee.

The results are certainly promising!  The “Ancient Biotics” team will continue their research into this and other methods of controlling super bugs.

The Unexpected Technique That Will Help You Perform CPR

Honoring Real Heroes in Our Community
Scroll to top