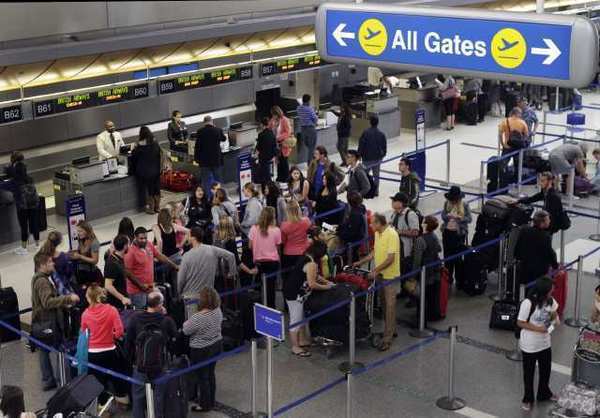 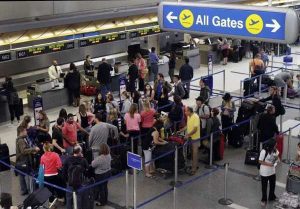 It was a typical Saturday at LAX with passengers rushing between terminals and from gate to gate. Tony and Sharon Mejia of Bakersfield, California were no exception, as they were returning home from a business trip on the east coast late Saturday night. They were the last ones to get off of their plane and were fortunate enough to catch an electric car to get to their connecting gate.

Just before they arrived to their destination, they spotted a fellow passenger who did not quite make it to his. He had collapsed due to running between connecting flights. Tony, with a background as a paramedic and Sharon, a CPR instructor and the owner of CPR Plus, quickly assessed the situation together. The man was unresponsive, bleeding from a cut over his eye and barely breathing.

The husband and wife team sprang into action along with a bystander, who brought an AED, or Automated External Defibrillator. They rolled the man, now a patient, onto his back and noticed that he had stopped breathing, his pupils were not reacting and he had a very weak pulse. Tony began rescue breathing while Sharon applied the AED to the patient’s chest. “Analyzing rhythm, do not touch the patient. Shock advised”. The team utters, “I’m clear, you’re clear, all clear.” “Shock delivered”. After the shock, the man’s breathing improved but only for a moment. He stopped breathing again and no longer had a pulse. The team began CPR and the patient received a total of three shocks. After the last shock, the patient began to breathe again and his pupils began to react.

Within a few more minutes, the LAFD arrived and took over care. By this time there was quite a crowd and the Mejia’s stayed around to make sure that the man-turned patient was going to remain stable. Moments before, the patient’s life was fleeting and now to the Mejia’s delight, he was talking to the crew as they removed him from the airport.

All three of them were supposed to be on the same flight to Bakersfield but unfortunately, the plane had already left. The Mejia’s had missed their flight and had to rent a car to drive home that night. But both say, “It was a small price to pay to save a man’s life.” Before leaving the airport, they learned that the man worked for Nestle, Tony’s former employer, which means at some point they were coworkers. It’s a small world, but we are all placed right where we need to be, right when we are needed.

The Importance of Prolonged CPR

A CPR APP That Is Saving Lives!
Scroll to top